https://www.economist.com/graphic-detail/2020/01/18/smoking-gun-evidence-emerges-for-racial-bias-in-american-courts
https://www.reddit.com/r/moderatepolitics/comments/euzqh4/smokinggun_evidence_emerges_for_racial_bias_in/ffsmy12/
Prior to 2010, anyone caught with more than 50 grams of crack faced a 10 year minimum sentence. After that year, a person caught with below 280 grams could get up to five years and someone caught with more than that amount could get 10 years.
Before 2010, the distributions of amounts people allegedly possessed in charging papers followed a normal distribution. Moreover, the amounts were the same for both white and black people. But after 2010, prosecutors started accusing black people - but not white people - of having exactly 280 grams of crack (i.e. the amount at which the charge doubles).
See this chart. (below)
Moreover, this change didn't occur uniformly across the US. It specifically occurred in states where people are more likely to Google search for racial slurs. In other words, the charging disparity cleanly matches with other, independent, evidence of racial bias. You can see a chart of those states here.
So unless you think black people randomly started carrying exactly 280 grams of crack in 2010, this cuts a huge hole in the argument that there are more black people in jail because black people commit more crimes. This shows that charging authorities go out of their way to accuse black people of more sever crimes under facts where they would charge white people more leniently. 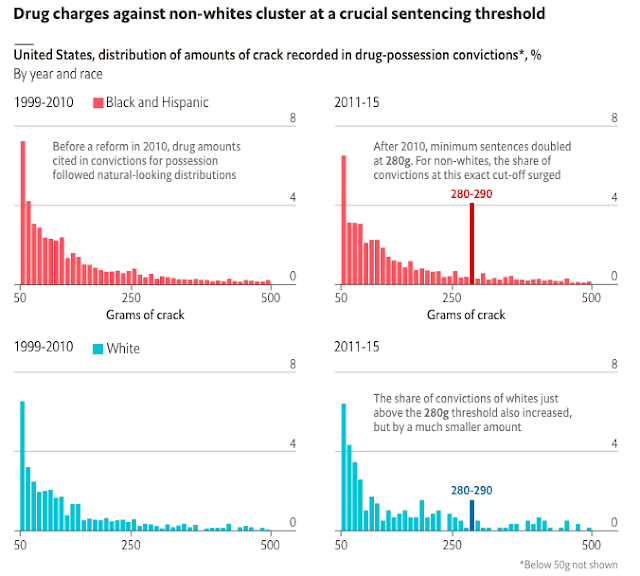