So, we love animals. None of us WANT to hurt them. We got INTO this field because we all want to understand them in order to help keep them around for future generations.

That said... My job requires me to do a few things that require me to basically turn off my emotions and concentrate on the research... It’s only possible to postpone though and I always question everything about why I’m doing this, how to minimize suffering, and whether there is any other way. Even when the answer is that it’s required it still keeps me up at night and one experiment from undergrad still makes me cry at least once a year and really question whether that one experiment made me a bad person.

She has been utterly heroic in her illness. Funny, of course — generous, brave, uncomplaining, constantly reminding us all of how lucky we’ve been, how blessed we are. Her generosity has extended to encouraging us three to live. Live fully, take opportunities, have adventures. Only a couple of weeks ago she said to us from her bed, “I want Daddy to have girlfriends, lots of them, you must all love again, love isn’t possessive, but you know, Damian, try at least to get though the funeral without snogging someone.”

Already I miss her. She has shone more brightly in the last months than you would imagine even the brightest star could shine. In life, too, we had to rise to meet her. But her greatest and most exquisite act of bravery and generosity has been to “normalise” her death. She’s shown no fear, no bitterness, no self-pity, only armed us with the courage to go on and insisted that no one be sad, because she is happy. I’m staggered by her. She’s been a meteor in our life.

Whiteness is a social construct, not an inherent genetic trait.

One of the problems with the polarized way we talk about the history of racism is that it swallows subtleties. The reality is that no one is white. We're all human beings, and we all come in varying shades and hues of brown; from pale and pink-ish to a deep brown that looks navy blue in the shadows, and many olive and peachy and cinnamon tints in between.

"White" is an invented concept, and it the definition has varied to includes different groups over the few hundred years it's been in use. The Irish used to be very much on the outside of "white". As were Italians and Spaniards, and Poles, and others we easily assume are "white" today, when we have a broad skin-shade based understanding of the (fake) divisions between "races".

In fact, the English used many of the same tactics of colonization against the Irish and the Scots as they later did against Indigenous peoples on this land. Including pushing them off their lands and away from their traditional food sources; starving them by withholding other foods, while also extracting foods and profits from their lands; forcibly 'schooling' their children, and beating their languages and cultures out of them. Oh, and the English were aided and abetted in these efforts by a church that purported to care while sharing in the exploitation...

...does that sound familiar?

It's true that the Irish and Scots in many ways were co-opted into colonization, having moved to this land by the hundreds of thousands, fleeing English occupation, and it's true that they sort of gained 'whiteness' when they arrived on these shores.

BidenBucks Is Beeple Is Bitcoin In a system rigged by the rich, outsiders have to make their own volatility.

Imagine a great little restaurant that goes out of business. You think, Well, that’s a shame. Yeah. It’s a shame for the current 50-year-old owners. But it also means that the real estate and the supplies — dishes, the stove — go down in cost, and it gives a 28-year-old, a recent graduate of a Brooklyn culinary academy, her shot at owning a restaurant. Closures mean layoffs, of course. But new ventures quickly take up the slack. And in an empathetic — or even sane — system, direct payments to anyone affected could carry them through the transition.

In the 2008 financial crisis, we did stimulus, but stocks were allowed to fall. We basically said, “All right, we’re going into a massive recession, but what we need to do is make sure it’s not a depression.” Now, with COVID, that’s not enough. We decided that not only is a depression not tolerable but recessions aren’t tolerable. We threw trillions at the problem — so much stimulus that the markets went up.

Assets have never been higher because we keep printing money and doing more stimulus. Yet as a percentage of GDP, wages have tanked. How do young people make money? Wages. And then who owns assets? Old rich people. So all we said is, “Okay, people who get the majority of their income through wages, i.e., young people, get screwed. And people who have the majority of their earnings or wealth in assets like real estate and stocks do really well.”

The US Must Help Afghans Who Helped It

This is not an argument for staying militarily or for withdrawing U.S. troops. Rather, what happens to the many Afghans who helped us over the last 20 years and continue to aspire to build a freer, more pluralistic Afghanistan, if U.S. and NATO forces leave without a sustainable peace settlement?

For two decades, tens of thousands of Afghans worked directly for or supported the U.S. military and civilian presence. In 2009, Congress created a Special Immigrant Visa (SIV) program to permit a narrow subset of that group to immigrate to the United States. But the process has been slow and difficult to implement. Only a little over 18,000 of these applications have been approved over the last decade. Today, there are another 18,000 SIV applications waiting to be processed.

A decade ago, a surging Silicon Valley giant was making plans to dominate the internet. Given a chance to stop it, regulators chosen by Barack Obama misread the evidence in front of their eyes.

Nearly a decade ago, the documents show, the FTC’s investigators uncovered evidence of how far Google was willing to go to ensure the primacy of the search engine that is the key to its fortunes, including tactics that European regulators and the U.S. Justice Department would later label antitrust violations. But the FTC’s economists successfully argued against suing the company, and the agency’s staff experts made a series of predictions that would fail to match where the online world was headed:

— They saw only “limited potential for growth” in ads that track users across the web — now the backbone of Google parent company Alphabet's $182.5 billion in annual revenue.

— They expected consumers to continue relying mainly on computers to search for information. Today, about 62 percent of those queries take place on mobile phones and tablets, nearly all of which use Google’s search engine as the default.

— They thought rivals like Microsoft, Mozilla or Amazon would offer viable competition to Google in the market for the software that runs smartphones. Instead, nearly all U.S. smartphones run on Google’s Android and Apple’s iOS.

They Thought They Were Free The Germans, 1933-45, by Milton Mayer 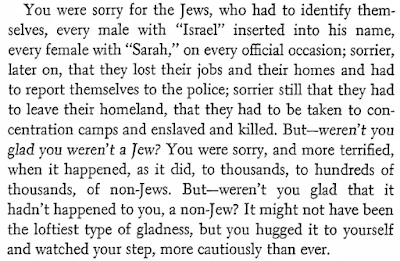 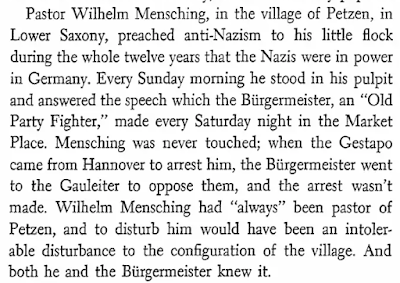 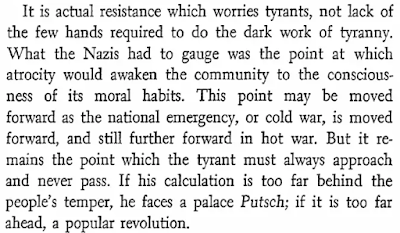 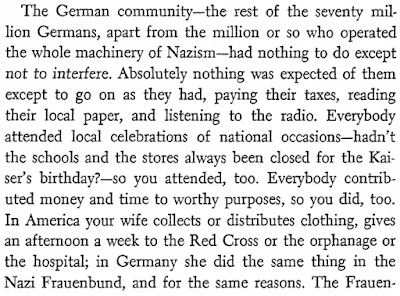 purrfunctory on Dachau and a great uncle

My Grand Oncle Jacques (Great Uncle) was imprisoned in Dachau for three years. He was a member of the Belgian Resistance and was tasked with finding food and faking/forging ration cards to help feed the Jews in hiding. When not busy with that tremendous task, he helped with the militia that sabotaged Nazi vehicles, trains, whatever infrastructure they could damage to slow them down.

I met him several times as a young child, and with a child’s curiosity I asked him about the number on his arm. In age appropriate terms, Grand Oncle Jacques explained to me that he was in prison during a war because the bad guys caught him and punished him for it. He told me he had the tattoo because the bad guys wanted an easy way to tell prisoners apart.

The next time I saw him, I asked why his hands were bent and fingers curled. This beautiful, broken man explained, so kindly, that the bad guys tried to make him tell on his friends by hurting him. They broke his fingers and his hands, his feet and his knees. They broke his wrists and hit him with whips and did many cruel things. I was in tears and asked why he didn’t just tell on his friend.

Grand Oncle Jacques kissed my hair and dried my tears. And then he said, “My sweet child, one day you will learn about the bad men and what they did to innocent people. I wasn’t just protecting my friends. I was protecting hundreds, perhaps thousands, of innocent people all over Belgium.”

The song I will Survive, the Gloria Gaynor classic, came on the radio. And this beautiful man, bent and broken by Nazi abuse, a man with twisted limbs, a man whose every step caused pain. This amazing, wonderful man got up and he danced. He held my hand in his and I danced with him, with the carefree spirit of a child. When the song finished, he sat down and mopped the sweat from his face. He drank some lemonade and held my hand tightly, between his gnarled and broken ones.

That was the last time I saw him, as his many injuries and ailments made him far too fragile to travel internationally. I grew older but each time the song comes on, I will dance. When I was whole, I’d bust out in a full boogie no matter how ridiculous I looked.

Mary Hương Thị Phạm was one of the tens of thousands of Vietnamese refugees who fled for America in the 1980s. She became a U.S. citizen in 1995. She had a challenging life, navigating a new world and raising two kids, but she always made sure she taught her children to learn from the obstacles in their way.

“The challenges were good lessons for us,” Kathy Pham said. “We got jobs as soon as we were old enough to work so we could pay for our expenses and also help support the household. I think that’s good practice for any family regardless of income.”

“Another challenge was figuring out where I could go to college,” she added. “But that limitation led to me staying in state and going to Georgia Tech, which set such a strong foundation for the rest of my career. And I still smile thinking of all the bragging my mom would do about me and my brother going to Tech.”

Live a life worth living

https://lettersofnote.com/2021/03/01/live-a-life-worth-living/
Life is not fair. You would be foolish to expect fairness, at least when it comes to matters of life and death, matters outside the scope of the law, matters that cannot be engineered or manipulated by human effort, matters that are distinctly the domain of God or luck or fate or some other unknowable, incomprehensible force. [...]

I have often dreamed that when I die, I will finally know what it would be like to see the world without visual impairment, to see far into the distance, to see the minute details of a bird, to drive a car. Oh, how I long to have perfect vision, even after all these years without. I long for death to make me whole, to give me what was denied me in this life. I believe this dream will come true. Similarly, when your time comes, I will be there waiting for you, so that you, too, will be given what was lost to you. I promise. But in the meantime, live, my darling babies. Live a life worth living. Live thoroughly and completely, thoughtfully, gratefully, courageously, and wisely. Live!

I love you both forever and ever, to infinity, through space and time. Never ever forget that.